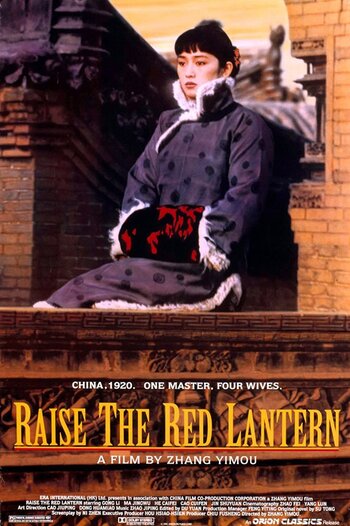 Let me be a concubine. Isn't that the fate of a woman?
Meishan, Third Concubine: Good or bad, it's all playacting. If you act well, you can fool other people; if you do it badly, you can only fool yourself, and when you can't even fool yourself, you just can fool the ghosts.
Songlian, Fourth Concubine: The difference between people and ghosts is only a gasp of air. People are ghouls and ghouls are people.
Advertisement:

Raise the Red Lantern is an award-winning 1991 film directed by Zhang Yimou and starring Gong Li, in the role that brought her to international attention. It is set in the early 1920s, well before the Communist Party's conquest of the country.

After the death of her father, the family of 19 year old university-educated Songlian is left destitute. She marries wealthy Master Chen, becoming his fourth and youngest wife. Upon arriving at his palatial estate, she is greeted with a massage, and her private room is decorated with brightly lit, red paper lanterns preceding a visit from her new husband.

Songlian soon discovers that this treatment is not regular. Every evening, the four wives (Yuru, Zhuoyun, Meishan and Songlian herself) are made to stand before their doors in their shared courtyard while their husband decides who he will sleep with that night, announced by the placing of the eponymous red lantern in her doorway. That woman alone receives regal treatment, while the others are left alone. Trapped in the largely empty but claustrophobic estate, the four wives are locked in a constant power struggle for Chen's attention.

The film is an adaption of the 1990 novel Wives and Concubines, by Su Tong. It was temporarily Banned in China, until the film gained international praise and was shown to have a positive impact on tourism. The film was later adapted into a ballet.