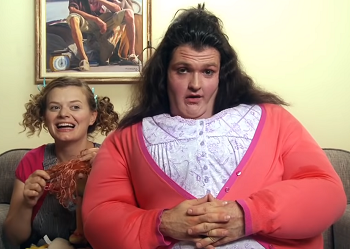 "She my precious Plum..."
Advertisement:

Precious Plum is a series of videos by CollegeHumor. It is an exaggerated parody of Here Comes Honey Boo Boo, and focuses on the escapades of Mama and Plum Miller, who often get themselves into life-threatening situations, which are Played for Laughs. While the series started as a direct parody, it started to have more fun with its own characters and took the stories in their own direction.

The series continues with a web series See Plum Run, in which twelve-year-old Plum tries to run for Student Body President after the Millers move to an upper-class suburban neighborhood and Plum gets into prep school.

Tropes applying to the series include:

Mama: He didn't eat my pussy, so he can suck my dick!