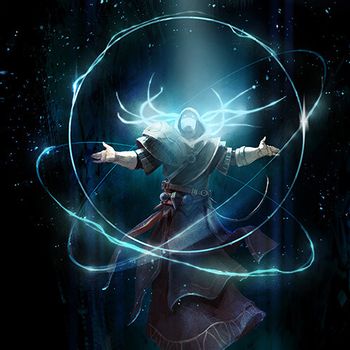 Who needs hair when you can have tentacles?

Chaos Reborn is a 2015 Turn-Based Tactics game for PC, with strong board game influences. It was created by Julian Gollop - mostly known for being the creative mind behind the original X-COM - as a modern reimagining of one of his oldest classics, the ZX Spectrum game Chaos: The Battle of Wizards (1985). In 2018, the game was also ported to iOS as Chaos Reborn: Adventures.

In simple terms, Chaos Reborn is all about wizards duelling each other to the death, through casting magic spells and conjuring various creatures from a deck of cards. What looks like a virtual board game with elements of Magic: The Gathering or Hearthstone actually differs greatly from typical trading card games in many respects. Most importantly, there is no deckbuilding. Players have access to the entire pool of cards from the very first time they start the game, but absolutely no control over what cards will be in their deck. Levelling and gearing up their wizards, however, will allow players to gradually influence the content of their deck, and while they can never outright choose what cards to take into battle, they can focus on specific types of spells and summons, and greatly modify their stats and effects in various ways. This element of chaos and control shapes the very heart of the game.