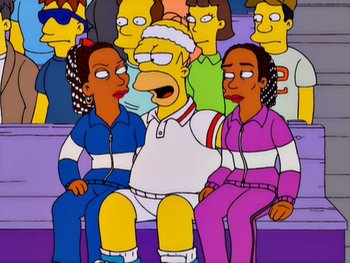 "You're dumping your own daughter?"
"Yeah, but only to crush my wife and son."
Advertisement:

The Simpsons install a tennis court in their backyard after Homer is told that a mausoleum he wants for the still-alive Grandpa Simpson would need enough concrete for a tennis court — and it (the tennis court) ends up tearing the family apart when Homer's goofing off becomes gossip fodder for the neighborhood and Marge decides to trade him in for Bart.