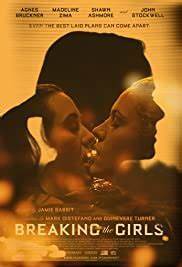 A crime thriller film from 2012 in the US. Its plot begins as a twist on the standard "Strangers on a Train"-Plot Murder but then goes another direction. Sara Ryan, a struggling college student, is attracted to Eric Nolan, who's taken. His girlfriend, realizing this, uses her influence to get Sara's scholarship revoked and end her study at the college. Sara meets a young woman in a bar, Alex, whom she has mutual attraction with. Alex has an issue with her stepmother, who she loathes, and when the two have then gotten involved proposes they each murder the other's "problem". Sara dismisses it as a joke at first, but then realizes Alex not only is serious but expects her to follow through with their supposed "deal" too...