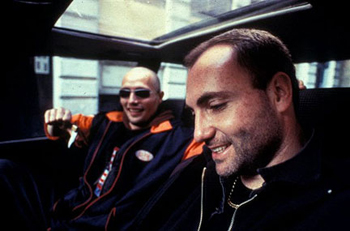 Pusher is a Danish crime film written and directed by Nicolas Winding Refn, and starring Kim Bodnia, Zlatko Burić, and Laura Drasbæk. It also marked Mads Mikkelsen's film debut. In 1996, a Danish crime film was quite novel, and its popularity had a great influence on Danish films to follow. In this respect, it was something akin to the Pulp Fiction of Denmark. Two sequels, filmed back-to-back, followed almost ten years later to rescue Refn's ailing film company from bankruptcy. Each sequel follows a different character introduced in the first film.

The first film follows Frank (Bodnia), a mid-level Copenhagen drug dealer. After a drug deal gone bad, Frank finds himself deeply in debt to Milo (Burić), a local Serbian drug lord. As Frank struggles to find the money, he must also grapple with complications from his would-be girlfriend (Drasbæk) and the dubious loyalty of his partner, Tonny (Mikkelsen).

The second film, released in 2004, picks up with Tonny after he completes a prison sentence and returns to his estranged father's chop shop. Tonny struggles to earn his father's respect in the underworld and be there for his own son.

The third film, released in 2005, follows a day in the life of Milo, who struggles with preparations for his overbearing daughter's birthday while fending off Albanian drug dealers and his own lurking addiction.

An English version of the first film was released in 2012, to little fanfare.