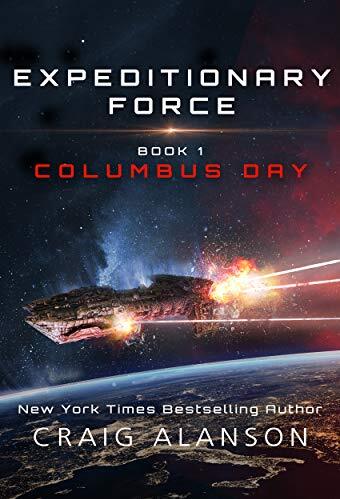 Skippy the Magnificent and his monkey pirate crew.
We were fighting on the wrong side, of a war we couldn't win. And that was the good news.
The Ruhar hit us on Columbus Day. There we were, innocently drifting along the cosmos on our little blue marble, like the native Americans in 1492. Over the horizon come ships of a technologically advanced, aggressive culture, and BAM! There go the good old days, when humans only got killed by each other. So, Columbus Day. It fits.
Advertisement:
When the morning sky twinkled again, this time with Kristang starships jumping in to hammer the Ruhar, we thought we were saved. The UN Expeditionary Force hitched a ride on Kristang ships to fight the Ruhar, wherever our new allies thought we could be useful. So, I went from fighting with the US Army in Nigeria, to fighting in space. It was lies, all of it. We shouldn't even be fighting the Ruhar, they aren't our enemy, our allies are.
I'd better start at the beginning....

Expeditionary Force is a series of Military Science Fiction / Space Opera novels written by Craig Alanson and narrated by R.C. Bray (of The Martian audiobook fame). The series centers around a Forever War that has been raging across the galaxy since time immemorial. The two apex species of the galaxy have been busy recruiting lesser species for the effort, and the lesser species in turn have recruited their own client species.

Humanity has just joined the war, and it is at the bottom of the ladder.

The story follows Joe Bishop, a groundpounder who gets caught up in humanity's first interstellar war effort. After two of the lower level species come to Earth to fight over its potential as a staging ground, one of the species - the lizard-like Kristang - recruits hundreds of thousands of humans to help them forcibly evacuate the other species - the hamster-esque Ruhar - from a completely different world they are fighting over. As the Ruhar were the first to show up to Earth and the first to start bombing it back to the Stone Age, humanity eagerly agrees to help the Kristang in any way possible.

However, it soon becomes clear that the Kristang are not the benevolent saviors they portrayed themselves as. The humans of the Expeditionary Force on the planet Paradise soon realize that their "saviors" the Kristang are war-like, brutal, and completely unforgiving of insubordination. Unfortunately, humanity is also completely reliant on the Kristang for star travel and supplies. Soon the Expeditionary Force finds that it is caught in a war between two alien powers with barely any hope for survival, let alone escaping the conflict...

...that is, until Joe Bishop meets an advanced alien precursor AI dubbed Skippy. Skippy boasts numerous reality-warping powers well beyond the understanding of even the most senior species in the galaxy, and he wants Joe's help to escape from Paradise so that he can reconnect with his own kind. With Skippy on their side, humanity finally has a chance to break free of the Kristang's control and get out of the galaxy-wide war.

The only problem? It turns out that Skippy is an arrogant, absent-minded asshole.

With Skippy on their side (shmaybe) and a hijacked alien starship under their (or rather, Skippy's) control, humanity finally has some chips in the game, but the moment anyone discovers that the primitive monkeys of Earth have been working with an Elder AI to warp space-time and subvert the hierarchy of control in the galaxy that has been in place for eons, it's game over for humanity.

The Expeditionary Force series follows the escapades of Joe, Skippy, and their recruited Merry Band of Pirates as they zoom around known space, alternating between finding lost technology for Skippy, saving humanity, and generally trying to stay out of trouble (and failing). The highlights of the series include the... unique working relationship between Joe and Skippy, creative problem-solving to handle impossible tasks, sci-fi special operations action, and the occasional loving sendup of military culture.

The series has a spin off called Mavericks following troopers from the Paradise planet.

The Expeditionary Force series as a whole contains examples of: