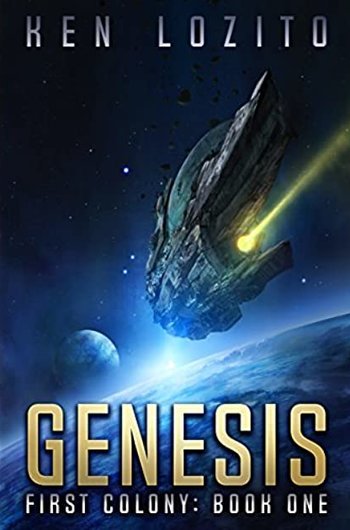 First Colony is a military science fiction series of novels by Ken Lozito. The series focuses on humanity's first extrasolar colony far from Earth and the struggles of the settlers when faced with the unknown.

The series currently consists of 10 novels:

The main POV character of most of the novels is Colonel Connor Gates, who initially leads an elite black ops team known as the Ghosts. A mission to take down The Syndicate goes awry, leading to millions dead. Realizing that Connor and his team would become the scapegoat, Admiral Mitch Wilkinson, an old friend of Connor's father's, has Connor knocked out and placed in a cryopod, which he then smuggles aboard the Ark, humankind's first extrasolar colony ship, bound for a habitable exoplanet found 25 light years away. The journey is supposed to take over 80 years, and the Admiral hopes that Connor will have a fresh start away from the Solar System. Awakening from slumber, Connor at first has trouble believing that he is no longer in the Solar System. Eventually he learns that not only is he aboard the Ark, but that the ship itself is not where it's supposed to be. Partway through the flight, a data burst from Earth reprogrammed the navigation computer and redirected the ship to another habitable planet 60 light years from Earth, extending the journey to about 200 years.

Connor goes down to the colony (with only 20,000 of the 300,000 settlers having been awakened from cryosleep) and quickly learns that the local security forces are woefully unprepared for the planet's dangerous wildlife. He quickly convinces the colony's governor and the head of security to allow him to train a search-and-rescue platoon and also makes numerous suggestions to improve security, which earns him the ire of Damon Mills, the head of security's second-in-command, who takes Connor's criticism personally. Despite this, Connor receives his first group of volunteers and spends weeks training them in the wilderness. One of the volunteers is Sean Quinn, the young son of the colony's governor and chief medical officer. Unwilling to let his parents decide his life for him (and also unwilling to accept any treatment as "the Governor's son", Sean sneaks away to the training camp (Connor initially refused him because he wasn't 18 yet) and proves to be a capable young man, taking every bit of training and punishment thrown his way with zero complaint. Sean Quinn is another POV character in some of the novels, eventually rising through the ranks to become a colonel.

Meanwhile, scientists have found alien ruins on the planet (which many have started calling New Earth pending an official naming). In addition, there's still the mystery of why the Ark was redirected in the first place.