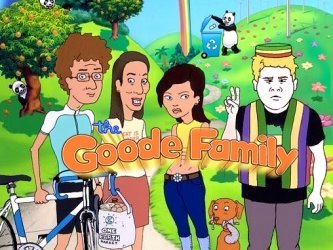 Mike Judge's next animated series after King of the Hill. Just as KotH was a parody of straitlaced conservative Middle America, The Goode Family skewers the other side of the political spectrum (liberal, politically correct West Coast America), as exemplified by the titular family of liberals who do their best to maintain political correctness in all facets of their lifestyle, as difficult as it can be at times.

The family consists of Gerald, a community college professor; Helen, a self-proclaimed activist; Bliss, their snarky teenage daughter, and Ubuntu, their adopted African son who turned out to be a white South African. Other characters include Che, the family dog whom they raised as a vegan (but who often sneaks out to eat wild animals and neighborhood pets), and Charlie, Helen's sarcastic father who doesn't approve of their lifestyle.

Originally airing on ABC, it was canceled during its only season. Comedy Central aired reruns of the show, but it failed there as well. It can now be seen in reruns on Amazon Prime Video, NBC's new streaming service, Peacock; and TubiTV.