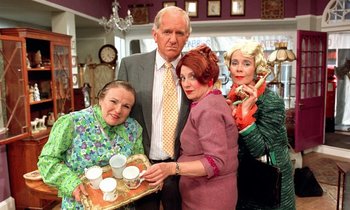 Acorn Antiques: Julie Walters, Victoria Wood, Duncan Preston and Celia Imrie
Victoria Wood - As Seen On TV is a British Sketch Show, written by and starring Victoria Wood. Following an ITV show, Wood and Walters, she was offered a new show by the BBC which she accepted provided she was given a greater say in the production than she had been previously. Having felt that her previous show was hamstrung by the casting, she insisted on working on a repertory of actors who were names in their own right (rather than the sometimes anonymous side men who had been typical in sketch shows up until then) so hired people such as Julie Walters, Celia Imrie, Duncan Preston, Susie Blake and Patricia Routledge. The result was the perfect marriage of Wood's incisive and sharp comedy writing with high calibre comic acting.
Advertisement:

Each show consisted of an opening monologue from Wood, at least one comic song and a spoof documentary, but perhaps the most fondly remembered aspect of the show was Acorn Antiques — a parody of the then popular soap opera Crossroads featuring deliberately shonky camera work, wooden acting and poor expository dialogue. Acorn Antiques ended up being spun off into a West End Musical.

The series was also notable for the descriptions in the listings magazine Radio Times, which generally had little or nothing to do with the contents of the show itself ("The last of the series 47: Managing without Opera. How are Hanna and Gavin coping?") — all the descriptions were written by Victoria Wood herself.