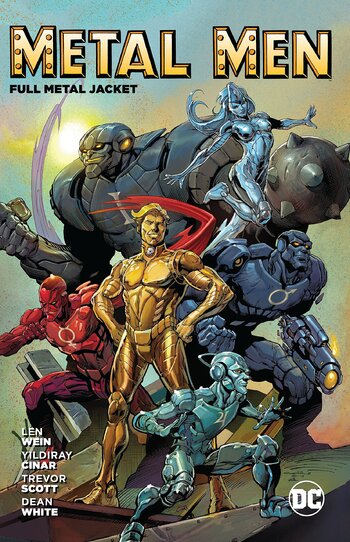 Avenger assembly required.
Lúcio: You should come to Rio, Orisa. I could use your help with those Vishkar goons.
Orisa: I do not know about this Vishkar, but I am programmed to assist where I can.
— Overwatch
Advertisement:

Superheroes come in all different kinds of flavors. One such flavor is robots. Simply put, a robot superhero is a robot who performs superheroics. How and why a robot acts as a superhero varies. Sometimes, the robot is specifically built, designed, and programmed to protect and save humanity. Other times, the robot was made to do evil acts but instead turns on their creator upon realizing said creator's true intentions. Androids and robots are commonly thought of as cold, emotionless, and not caring much for humans beyond following orders. As such, a bot that actively fights crime and saves (human) lives can come as a bit of a shock to those with the aforementioned mindset.