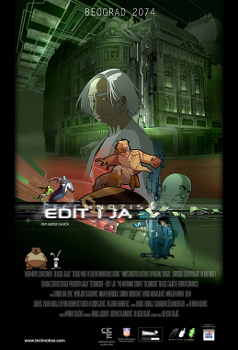 "First cold. Then pain. The pain of birth. Then I realized my energy cell was running out unusually fast. So fast there was only time for my short life to flash before my eyes. "
—Opening Narration
Advertisement:

Technotise Edit I Ja (Technotise: Edit & I) is a 2009 Serbian cyberpunk dramedy animated film which serves as a sequel to Aleksa Gajić's graphic novel Technotise.

The year is 2074. Belgrade is filled with hovercars and robot pets. Edit Stefanović is a psychology student who takes care of an autistic math genius named Abel. After failing a certain exam six times, she visits a dealer at the black market in order to install a memory chip that will record everything she sees, helping her pass the exams. However, after seeing Abel's formula, which connects all forces in the world, the chip becomes sentient and develops a personality of its own.

The animation is decidedly animesque and is taken on in four styles - rotoscoping, classic 2D, 3D and vector animation. Rumors of another novel being adapted to yet another sequel exist. There are also plans for a live-action remake

. It is currently streaming on Amazon Prime and TubiTV.