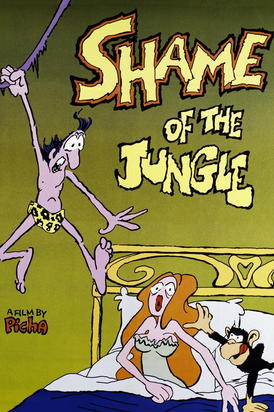 The movie takes place in Darkest Africa where the evil Queen Bazonga plans to conquer the earth. Before she can do that, however, she wishes to have a full set of hair so people can take her seriously. Her two-headed assistant, The Charles Of The Pits, suggest a "scalp transplant". Bazonga demands the hair of June, the maid of Shame, ruler of the jungle and sends out her penis soldiers to kidnap her.

It only gets weirder from there.

The film was the first foreign-animated film to receive both an X rating and wide distribution in the United States. It was received negatively by both audiences and critics who compared it unfavourably to Fritz the Cat and these days has almost completely fallen into obscurity. It was released on DVD as Jungle Burger in the UK by Lace DVD in 2011. As of now, there are currently no plans to release it in North America.

Tarzoon: Shame of the Jungle provides examples of: