Western Animation / Down and Dirty Duck 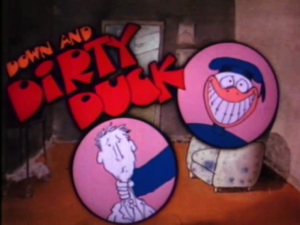 "Wouldn't YOU like a Good Duck tonight?" note  The Tagline for the theatrical release of the film.
Advertisement:

A 1974 adult animated comedy film, directed by Charles Swenson under the Working Title "Cheap!" (instances of this title made it into the finished film) and produced by Roger Corman, with animation by Murakami-Wolf Production Company.

It tells the story of Willard, a sexually frustated blue-collar worker who is taken on a "raunchy adventure" by a duck, a character evolved from the producers' previous work, the Dental Hygiene Dilemma in Frank Zappa's 200 Motels, which also shares Flo and Eddie (Howard Kaylan and Mark Volman) as stars (the duo voice the two main characters).

Catching the bandwagon of Ralph Bakshi's Fritz the Cat, it's very influenced by Underground Comics. Don't confuse the film with Bobby London's comic Dirty Duck, though. It has nothing to do with it. London hates this movie for this reason, as this movie has caused confusion by leading fans of London's comic to believe this movie was an adaptation of his work (which it is not).