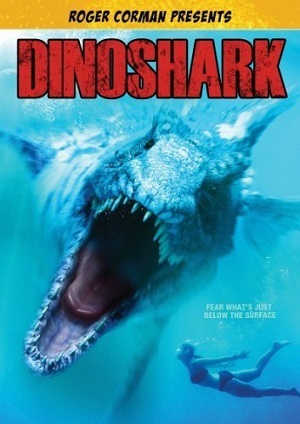 Dinoshark is (yet another) Syfy Channel Original Movie. Produced by Roger Corman, it first aired in March 2010. It is reportedly a remake of the the 1979 movie Up From The Depths, though obviously also inspired by the Dinocroc movies Corman also made recently for SyFy.

In the film, a prehistoric creature resembling a shark with a tyrannosaurus head that had somehow gotten frozen alive in a glacier, is released when it melts. Three years later, it starts attacking people and boats off the popular tourist town of Puerto Vallarta, in Mexico. The protagonist, an American named Trace, tries to convince the locals of the monster's existence.