Film / Don't Be Afraid of the Dark 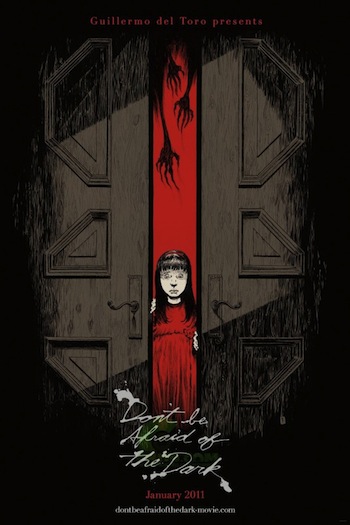 Don't Be Afraid of the Dark is a theatrical remake of the 1973 TV Made-for-TV Movie of the same title. The film was directed by Troy Nixey and produced by Guillermo del Toro. Already finished in 2010, it was shelved in the course of Miramax' sale by Disney and was released on August 26, 2011. It made its round through several film festivals and conventions before release.

The plot revolves around a little girl named Sally being sent to her father Alex's house. There, she meets her father's new girlfriend, Kim. As Sally explores the house, she comes across a strange grate in the basement. Unknown to her, the grate contains evil creatures called Homunculi that live underneath the basement. Alex does not believe her when she tells him, but Kim does. As time runs out, Sally and Kim must stop the creatures, who want to claim Sally as one of their own.

The movie is currently rated R for "violence and terror". Meaning, it was rated R only because it was terrifying.