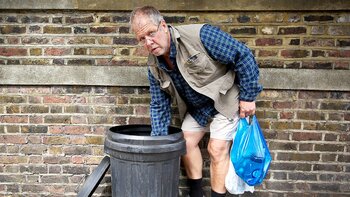 "Monday: And another day dawns in the twelve-year-old celebritocracy that is New Labour Britain."
Advertisement:

Ed Reardon's Week is a BBC Radio 4 comedy, written by Chris Douglas and Andrew Nickolds. It follows Edward Reardon, a divorced, washed-up, pence-pinching writer who makes it through the day with a combination of drink and acerbic wit. Once a moderately promising novelist, he is now reduced to writing coffee table, "impulse buy" books about celebrity pets to keep body and soul together. His favorite coping mechanism is making misanthropic observations about life, most of which he relays to his journal or his cat, Elgar.

The title character's name and the broad premise are taken from New Grub Street, George Gissing's 1891 novel about the pains of trying to make a literary living in late 19th-century London. Ed Reardon's vastly more successful friend Jaz Milvane is also transported from the same novel.