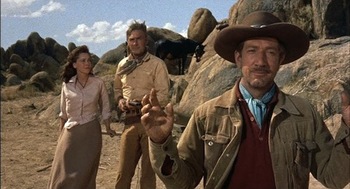 The Tall T is a 1957 Western film directed by Budd Boetticher.

Pat Brennan (Randolph Scott) is a former cowboy who is trying to make a go of his own ranch. He rides into the town of Contention for supplies, stopping along the way at a "swing station

" to water his horse and exchange pleasantries with station master Hank and Hank's son Jeff. Pat's looking to buy a bull to put to stud, but after he's goaded into a foolish wager, he not only doesn't get the bull, he loses his horse.

Pat starts the long long walk back to his ranch; he still has 15 miles to go when he hitches a ride on a stagecoach. The coach was rented by arrogant accountant Willard Mims (John Hubbard) and his meek wife Doretta (Maureen O'Sullivan), who are on their honeymoon. The coach stops at the swing station—but Hank and Jeff aren't there.

Instead, to their horror, the people on the coach find three bandits: leader Frank Usher (Richard Boone) and his wingmen Billy Jack (Skip Homeier) and "Chink" (Henry Silva). The bandits, who have already murdered Hank and Jeff, kill the coach driver and are about to kill the other three when cowardly Willard proposes instead that they hold his wife for ransom. A tense waiting period ensues after the bandits send off their ransom demand.

Based on a short story by Elmore Leonard called "The Captives".