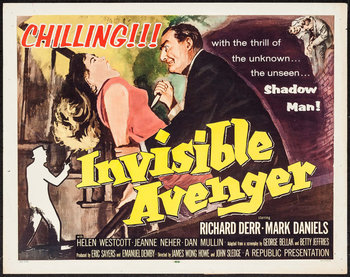 Invisible Avenger (a.k.a. Bourbon Street Shadows) is a 1958 Film Noir crime film directed by James Wong Howe, Ben Parker and John Sledge. The film is a Compilation Movie made from two episodes of a 1957 Republic Pictures television pilot for The Shadow.

When Pablo Ramirez, the exiled ruler the Caribbean nation of Santa Cruz now living in New Orleans, becomes a target of a kidnapping, Lamont Cranston and his mentor, a mystic named Joegendra, team up and put their mind-altering skills to work to help the man.