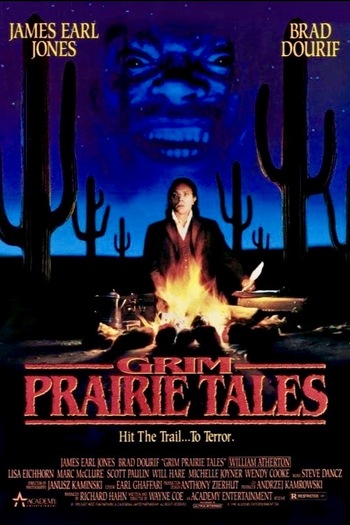 It is an Anthology Film of four separate stories, told by two travelers around a prairie campfire. Morrison (Jones) is a grizzled Bounty Hunter carrying a body, while Farley Deeds (Dourif) is a clerk on the way to a romantic reunion with his wife.

The first story, told by Morrison, is about an Indian tribe's revenge against a grouchy old man who desecrates their burial ground. When that tale fails to impress Deeds, the second story, also by Morrison, tells about a man who helps a seductive seemingly pregnant woman in trouble. Deeds, disgusted by the second story, responds with the only non-supernatural story of the three, about a homesteader family whose father is forced to participate in a lynch mob. Finally, after feeling challenged by Deeds' story, Morrison tells about a gunslinger haunted by a gunman he has killed in a shootout. The next morning, Deeds points out to Morrison that the body he's carrying doesn't match the description on the wanted poster; Morrison cuts the body loose and rides out.