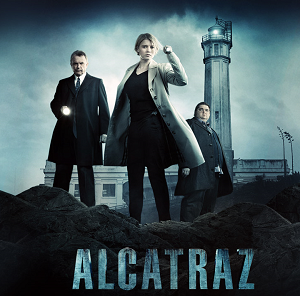 On March 21st, 1963, Alcatraz officially closed. All the prisoners were transferred off the island. Only that's not what happened. Not at all.
—Emerson Hauser, opening monologue
Advertisement:

Alcatraz is a 2012 Fox series produced by J. J. Abrams' Bad Robot Productions. On March 21st, 1963, all of the prisoners and guards on duty at Alcatraz Federal Prison mysteriously vanished without a trace. The government quickly put down a Masquerade, saying that Alcatraz had been closed down due to outdated technology and soaring budget costs. Now, in the present day, one of the prisoners who disappeared, Jack Sylvane, turns up, not looking a day older, and goes on a Roaring Rampage of Revenge, killing a deputy warden who gave him a hard time while he was in prison. This brings him to the attention of SFPD detective Rebecca Madsen (Sarah Jones), who finds his fingerprints at the scene. This in turn brings her to the attention of the mysterious Emerson Hauser (Sam Neill), who claims to be an FBI agent investigating the murder. With the help of Alcatraz expert Diego "Doc" Soto (Jorge Garcia), she is able to track down Sylvane, which gets her and Diego involved with Hauser's real project: to track down and recapture all of the "63"'s, including the mysterious Inmate 2002, who turns out to be Rebecca's own grandfather, Thomas Madsen.

Not to be confused with the Alcatraz Series.