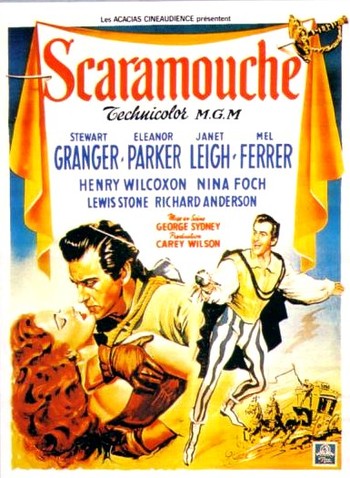 Will you do the fandango?
"But who is Scaramouche? And why does he hide his face behind a mask?"
— Lenore
Advertisement:

Scaramouche is the 1952 film adaptation of the novel by Rafael Sabatini, directed by George Sidney.

Stewart Granger plays the hero, Andre Moreau, with Mel Ferrer opposite him as the villainous Marquis de Maynes. The female leads are Eleanor Parker (as Lenore) and Janet Leigh (as Aline de Gavrillac). Metro-Goldwyn-Mayer went all-out on the sets and costumes and the climactic duel is the longest single-take Sword Fight in cinematic history.

The book was previously adapted as a silent film in 1923.