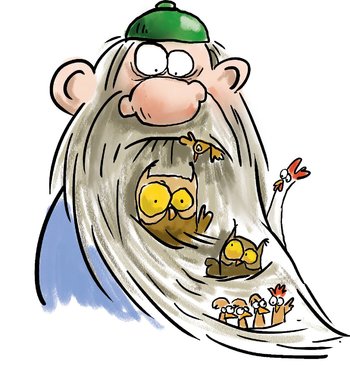 Two Owls and a Hen, Four Larks and a Wren, have all built their nests in my beard!
Facial hair grows naturally on the faces of most adult male humans. In spite of this, men have been shaving their faces smooth since time immemorial. At certain times and in certain places, those who choose not to do so may be marked out as at least different, if not strange, unsightly, or outright subversive. To varying degrees, either not shaving as such, or else maintaining a specific style of facial hair, may reflect negatively on the wearer. It may range from a simple aesthetic preference (such as when a woman says she prefers her partner to be clean-shaven) to an outright prejudice against a man who chooses to forgo the use of a razor. Some might wonder: "What is he hiding behind that thing?" Others would mark him out as too unconventional for their taste; still, others would simply see him as slovenly and too lazy to shave.
Advertisement:

Like anything else susceptible to changing fashions, facial hair has seen its fortunes rise and fall. There have been periods when full beards were very common and facial hair was ubiquitous, and others when beards were very rare and unpopular, most recently under the conformist, clean-cut trends that marked the 1950s and that would gradually be subverted during the 1960s and into the 1970s.

As a blanket prejudice against facial hair, this is now largely a Discredited Trope. In our day, when fewer people are concerned with taboos and superficial conventions than was once the case, a lot of men wear beards in various walks of life, and keeping a neatly trimmed beard will usually not garner ridicule or undue attention from one's surroundings, nor be a significant impediment to one's career advancement. Nonetheless, there are still workplaces, especially those of a military or paramilitary nature, which ban or restrict facial hair. Some styles of beard may attract more negative attention than others; such attitudes will in some cases be cyclical. Take the humble mustache for example. Around the end of the 19th century, it was ubiquitous. Many otherwise clean-shaven men wore one. The popularity of the mustache declined during the 20th century and by the 1950s it would have looked rather odd on a young man. In the 1970s, 1980s, and early 1990s, though, the mustache was quite popular again, and a man might wear one at least in part to emulate alpha-male Burt Reynolds or Magnum, P.I.. In the 21st century, however, wearing a mustache alone has become uncommon. Many people associate them with creepy uncles or 1970s porn stars, or at least with that decade of much-reviled fashion that was the 1980s. Attempts to revive the mustache have been made by hipsters, as well as through the Movember tradition, although mustaches grown as part of Movember often include elements of self-parody.

Not to be confused with Weird Beard, in which an object resembling facial hair takes the place of the latter, or where a beard is misplaced or has properties different than in real life.

Related in name only to Growing the Beard, when a series hits its stride of stylistic maturity, so named from Commander Riker in Star Trek: The Next Generation whose growth of facial hair in season two is said to coincide with an overall improvement in the show's quality.