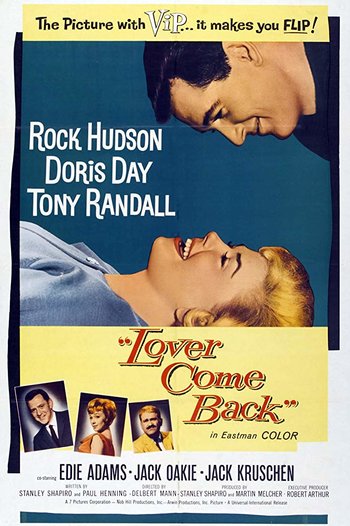 Lover Come Back is a 1961 Romantic Comedy released by Universal and directed by Delbert Mann. The film stars Doris Day, Rock Hudson, and Tony Randall.

Jerry Webster (Hudson) is a Madison Avenue ad executive who has achieved success not through hard work or intelligence but by wining and dining his clients, even setting them up on dates with attractive girls. Jerry's equal and sworn enemy at a rival agency is Carol Templeton (Day), who, despite having never met him, is disgusted by Jerry's unethical tactics and reports him to the Ad Council. Jerry avoids trouble by sending a comely chorus girl, Rebel Davis (Edie Adams), to seduce the council members. In exchange, Jerry promises Rebel a spot in commercials, so he shoots some featuring her for a nonexistent product called "VIP". He has no intention that they will be shown, but the perplexed company president orders them broadcast on TV. Jerry now in need to come up with a product quickly, bribes a chemist, Dr. Linus Tyler, to come up with some sort of product called VIP that could be marketed. When Carol mistakes Jerry for Tyler, Jerry doesn't correct her, and Hilarity Ensues.

This is the second of three movies in which Day and Hudson starred together (and also featured Randall in a supporting role), the other two being Pillow Talk (1959) and Send Me No Flowers (1964).