Literature / The Dark Half 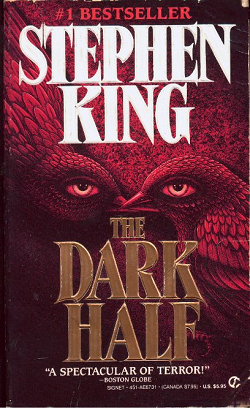 Thad Beaumont is a novelist who writes thrillers under the pseudonym of George Stark. As he moves on with his career, he begins using his real name and puts the pseudonym to rest, going so far as to hold a symbolic funeral and erect a headstone for the late Stark. Not long afterwards, someone with Thad's fingerprints and going by the name of George Stark starts killing people...

Was made into a feature-length film in 1993, directed by George A. Romero and starring Timothy Hutton as Thad and Michael Rooker as Sheriff Alan Pangborn.

The Dark Half provides examples of: