Western Animation / The D.A.R.E. Report: The Land of Decisions and Choices 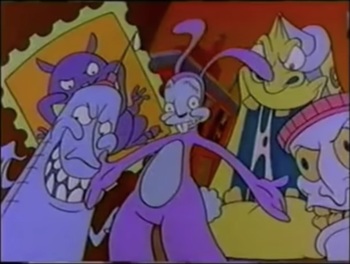 Yes, it's just as bizarre as it looks.
The D.A.R.E. Report: The Land of Decisions and Choices is a 1993 drug abuse educational animated video produced by D.A.R.E.note Drug Abuse Resistance and Education. It features four pre-teen kids that are working on a report about drug abuse and resistance for the D.A.R.E. program. But things go awry on the way to school when Officer D.A.R.E.'s puppy swipes the backpack containing said report, and the kids end up chasing him into the titular (and very surreal) Land of Decisions and Choices, where a drug dealer named Iggy and his kid Bumbling Sidekick Benny attempt to push drugs like cigarettes, alcoholic beverages, marijuana and cocaine to the four preteens while dressed like a rabbit and a bee, respectively. It is here that the kids' learned knowledge about drugs is put to the test...

It was unavailable in English for many years until late 2018, when it resurfaced on YouTube

This drug video provides examples of: