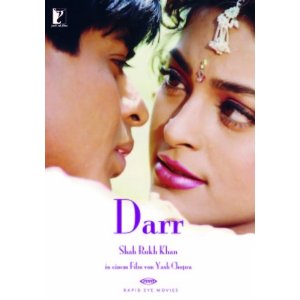 “Darr” means fear in Hindi, and this 1993 movie is appropriately billed as a “Violent Love Story.”

A beautiful young woman, Kiran, who recently graduated from college is engaged to marry a Naval officer, Sunil. As she and Sunil prepare for their wedding, she has a series of telephone and personal encounters with a stranger whose face she never sees. He tells her that he loves her and expresses hostility toward her fiance.

We are now introduced to Rahul, this person who has secretly loved Kiran during all their time at college together. As we first meet him, he is walking along a ledge at the top of a tall building. He is plucking petals from a rose and saying “she loves me, she loves me not” (or rather the Hindi equivalent) and stepping closer to the end of the ledge with each petal he plucks. He obviously is prepared to walk right off the building if it turns out “she loves me not.” We learn that he has continuous slide shows of huge photos of Kiran projected on all the walls of his bedroom and that he enjoys long telephone conversations with his mother who just happens to have died when he was a little bitty boy. His dad is Sunil's commanding officer in the Navy. Although unaware of Rahul's fixation on Kiran, he is a tad bit concerned about the sanity of his son.

Rahul is a charming and handsome young man who often hides his insanity and manages to ingratiate himself with Sunil and other members of Kiran's family, although Kiran herself never meets him. The steps he takes to secure his love for himself have ever more frightening results for Kiran and Sunil.