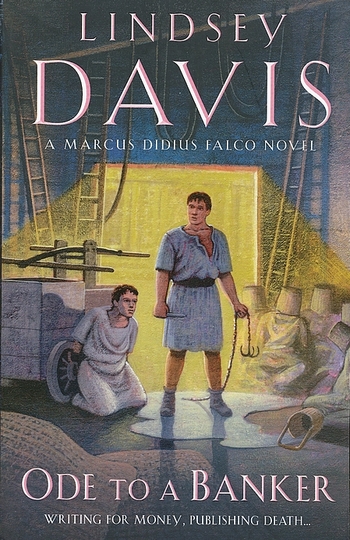 Some men are born lucky, others are called Didius Falco.

Central character and narrator of the Historical Fiction novels by Lindsey Davis. Falco is an "informer" (the equivalent of a private eye) in Ancient Rome around A.D. 70. Reviewers describe Marcus Didius Falco as "Sam Spade in a Toga", but existing centuries before Film Noir was invented makes Falco amusingly Genre Blind, and allows the author to gleefully subvert most Hardboiled Detective tropes. The series follows Falco as he takes on a series of cases, often in far-off provinces, and slowly climbs his way up the social ladder- while dealing with anal-retentive bureaucrats, foreign officials, his various siblings, and other hindering bastards. These, in turn, make the books a mix of historical fiction, crime, and comedy that blend in a very satisfying way.

The series runs as follows:

The Silver Pigs was loosely adapted into a movie Age of Treason (1993), with Austalian actor Bryan Brown playing Falco.

It has a pseudo-prequel, The Course Of Honour (1998), in which a young man called Vespasian climbs to the very top of the ladder and founds the Flavian dynasty of emperors. It also has what could be described as a grim footnote to the series, Master and God (2012) in which the reign of Emperor Titus ends prematurely and the second Flavian prince, Domitian, takes over as Emperor, goes insane, and the Flavian dynasty ends in his assassination. Then again, Davis wrote Domitian as the flaky, murderous one as far back in the series as The Silver Pigs (1989), so it's not too surprising...

The Ides of April picks up in 89AD, with Falco's adopted daughter, Flavia Albia, now an established informer in her own right, and continues with Enemies At Home and Deadly Election. Here the investigative mantle passes to Albia, and we learn her parents are semi-retired and living as inobtrusively as they can, their patron Emperor Vespasian being dead and their friend, his son Emperor Titus, also having passed. The imperial purple is now on the toga of Emperor Domitian, the unstable Caligula-like member of the Flavian dynasty and a man with no reason to love the Falcos. Rome is now even more unstable and dangerous to live in. The main Falco family is seen in glimpses and cameos, but the focus moves to the life of Albia.

The Flavia Albia novels, in order, are;