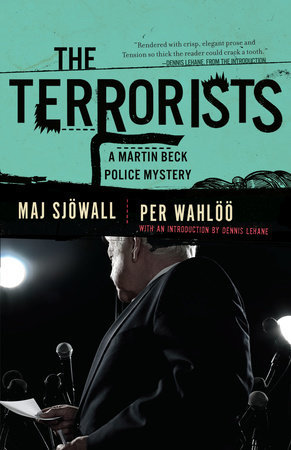 Martin Beck, or, alternatively, The Story of a Crime, is a series of 10 Nordic Noir mystery novels by the couple of the Swedish authors and journalists, Maj Sjöwall and Per Wahlöö, about the exploits of a titular detective, the head of the Special Homicide Commission in the Stockholm Police Department. They are notable for spurring the whole genre, and being one of the first representatives of the new wave of crime and mystery fiction that took the genre from the drawing rooms of the high society into the often dark and gritty world of Police Procedurals filled by realistic culprits and equally believable Defective Detectives.

The series, written almost in real time with its internal timeline between 1965 and 1975, chronicle the progress of titular Martin Beck from a middle-aged, disillusioned, dyspeptic and disappointed with his marriage detective to a still disillusioned (but at least more personally happy) Police Commissioner, who is finally resigned to see the Swedish welfare-state sliding through the dehumanising slippery slope of capitalism to the unpleasant end — both Sjöwall and Wahlöö were staunch Marxists, and conceived the novels as much as a social critique as an entertainment, though the message is weaved in quite subtly, without it becoming Anvilicious.

All of the novels were put to screen at least once, and between 1997 and 2016 34 made-for-TV movies were made, that only used the names of the main characters from the novels. The novels remain one of the finest example of the Nordic Noir, inspiring such followers as Henning Mankell's Wallander series and Stig Larsson's The Millennium Trilogy. They are still very much in print and widely translated into many languages, which, ironically, meant that the one surviving coauthor, Maj Sjöwall,note Per Wahlöö died of pancreatic cancer shortly after completion of the last volume. has never made money on them, because they still are printed according the original, not very profitable, deal with their publisher.