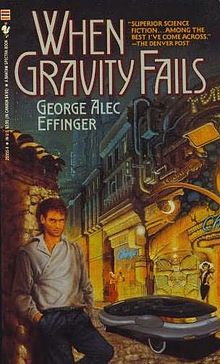 Business is business, and action is action.
— Unofficial motto of the Budayeen
Advertisement:

The Marîd Audran series (sometimes known as the Budayeen series) is a Cyberpunk adventure by George Alec Effinger, set in the late 22nd centurynote  (Audran was born the year 2172 by the western calendar, and is about 25) where Islam has risen to dominate world politics. Most of the stories are set in the fictional middle-eastern Red Light District called the Budayeen, which Anti-Hero Audran calls home. The Budayeen is loosely based on the French Quarter of Effinger's own home town of New Orleans. The series features cheap-and-easy brain plug-ins: "moddies", or personality modules, which have become one of the primary forms of entertainment, and "daddies", add-ons that provide specific skills like languages or technical expertise.

At the start of the series, Audran is a low-budget Private Detective and part-time hustler, who lurks in the low dives of the Budayeen, scrounging what work he can. When a potential client, looking for his missing son, is killed in front of Audran, it begins a series of events that will change Audran's life and fortunes forever.

Full of sex, drugs, and violence, the series consists of three novels: When Gravity Fails, A Fire in the Sun, and The Exile Kiss. A fourth novel, Word of Night, was planned but never completed. The parts of it that were written, as well as several short stories, are available in the collection Budayeen Nights.

The series inspired a video game, Circuits Edge, which stars Audran. There was also a Budayeen supplement to the tabletop role-playing game, Cyberpunk 2020.

No relation to Gravity Falls.

Alternative Title(s): When Gravity Fails, Budayeen, A Fire In The Sun, The Exile Kiss