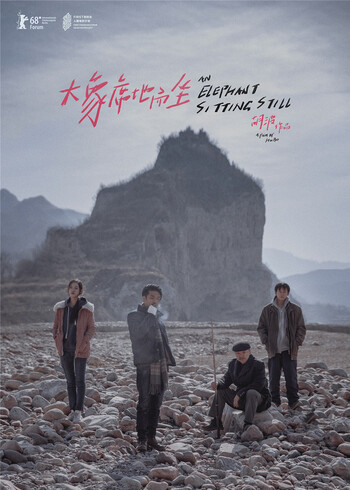 "The world is a wasteland."
"He told me the other day. There is an elephant in Manzhouli. It sits there all day long. Perhaps some people keep stabbing it with forks. Or maybe it just enjoys sitting there. I don't know. People gather there, watching it sitting still. They feed the elephant food. But it takes no notice."
— Yu Cheng
Advertisement:

An Elephant Sitting Still is a 2018 drama film written and directed by Hu Bo.

The film follow four protagonists and their respective stories. Wei Bu (Peng Yuchang) is a schoolboy on the run after pushing a school's bully down the stairs. Wei's classmate, Huang Ling (Wang Yuwen), falls for the charms of her teacher. Yu Cheng (Zhang Yu), the bully's small-time gangster brother, struggling with guilt after his friend commit suicide. And Wang Jin (Liu Congxi), whose married son tries to offload him to a nursing home. Towards the end, the four plots eventually converge into a single plot.