"I don't know if it's stupid, but it ain't smart."
Rig worker Caleb Holloway (Dylan O'Brien), on the crew Tempting Fate 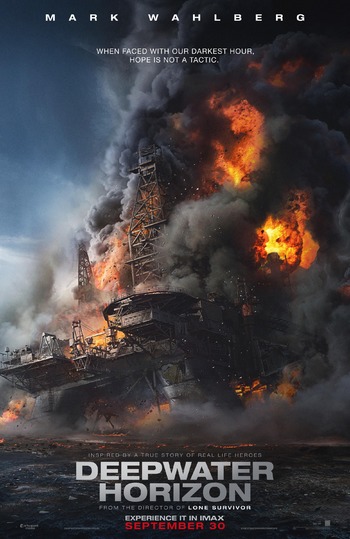 Mark Wahlberg, Kurt Russell, John Malkovich, and Kate Hudson star alongside relative newcomers Dylan O'Brien and Gina Rodriguez in a production that depicts the start of the worst oil spill disaster in U.S. history. Many of the characters are direct representations of real people, including protagonist Mike Williams (played by Wahlberg).

In April 2010, a group of Transocean crew are transported to the semi-submersible drilling rig Deepwater Horizon for the final stages of drilling the well they've been working on. Also along are some supervisors from BP, the company they're drilling for, who want to know why they have gotten so far behind schedule. Despite the myriad of problems the rig is experiencing, the BP reps insist on expediting the process regardless of the concerning warnings. When a test of the well that was insisted on results in a dangerous blowout, a series of events cascades out of control, threatening the entire rig and the lives of everyone on board.