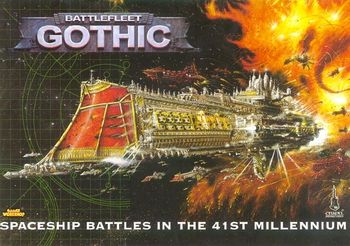 There is no peace among the stars...
Advertisement:

What happens when the people behind Warhammer 40,000 decide to make a game about spaceships.

Battlefleet Gothic takes everything cool about naval combat throughout history, and mixes it with the gothic aesthetic and unending, chaotic grimdarkness of the Warhammer 40,000 universe. Joyfully embracing Space Is an Ocean in every way possible, the game throws together vast hypertech spaceships, Napoleonic line tactics and broadsides, torpedoes and torpedo boats, sailing, planet-splitting weapons, ramming and boarding actions, Old School Dogfights, sea shanties and alien monsters.

The Imperial Navy, the focus of much of the game's art and background, is the very definition of Cool, but Inefficient. Imperial capital ships are millennia-old vessels resembling kilometres-long Gothic cathedrals, with spikes and spires for sensor masts, covered with pointless bling in the form of giant skulls or mile-high statues of eagles made of solid gold. They are filled with millions of press-ganged ratings and chanting priest-mechanics, loading gigantic shells by the back-breaking labour of thousands and unloading broadsides from gun decks the size of towns. Maintenance is ritualised, tech-adepts praying to machines they don't understand, anointing them with sacred unguents and beating them with holy wrenches. Warships are so old, so vast and so complex they develop their own cultures; entire societies of feral humans, the descendents of lost crewmen, lurk in forgotten decks.

The rulebook focuses on one campaign in particular, the twenty-year Gothic War, Abaddon the Despoiler's 12th Black Crusade against the Imperium. This scheme involves the Gothic Sector being cut off from the rest of the Imperium by warp storms, a lot of spiky warships, and six ancient space stations known as the Blackstone Fortresses. As with all of Games Workshop's Gaiden Games, Battlefleet Gothic enjoyed several months of publicity in stores and White Dwarf magazine before essentially dropping off the radar, new rules and models only occasionally being brought out. A supplement entitled Battlefleet Gothic: Armadanote not to be confused with the later computer game of the same name was released in 2003 that collated rules published in various official magazines and introduced a number of new factions, such as the Tau and the Dark Eldar, as well as a number of new ships for the existing factions. The supplement also included background and scenarios for fighting battles during the Third Armageddon War and the 13th Black Crusade. The game was published by Games Workshop's Specialist Games division until it, along with the rest of the Specialist Games line, was discontinued in 2013.

It did, however, remain one of the most enduringly popular spinoffs the studio had ever produced, helped in no small part by focusing on what was otherwise a critically-ignored part of the 40k universe and having ships with a much different aesthetic sense compared to others in its genre; fans of it therefore tended to like it passionately, and it remains more or less tied with Necromunda as the most beloved of GW's spinoff games. Thanks to this, even after the tabletop line was discontinued, multiple video game adaptations were greenlit and became reality: a Real-Time Strategy game series for PC, titled Battlefleet Gothic: Armada (and its numbered sequel), and a Turn-Based Strategy mobile game, Battlefleet Gothic: Leviathan.

Being set in the Warhammer 40,000 universe, the game features a large number of the tropes on that page, as well as employing setting and gameplay tropes of its own.