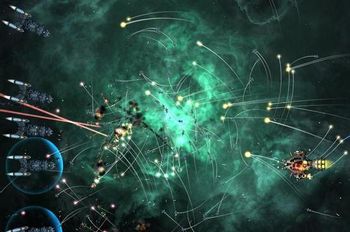 The essence of the game, in one shot.

Gratuitous Space Battles is a game about armed conflict taking place beyond any planet's atmosphere without any given reason. It was developed by Positech Games in 2009 and is available for download and purchase at their website

The game is rather unique among space battle sims in that the player does not actually give any orders during the battle itself; rather, the player can only make ship designs, dictate their starting position within the fleet, and modify each ship's AI before unleashing them on the enemy. After each battle, the player can analyze the results in order to tweak ship designs and fleet deployment before fighting again. Victories bring the player "Honor," which can be used to unlock hulls, components, and even other races.

There are four main races in the game: The Federation (available from the start), the Rebels, the Alliance, and the Empire. Additional factions — the Tribe, the Order, the Swarm, the Nomads, the Outcasts, and the Parasites — are also available through downloadable Expansion Packs. Each of these races has its own hull designs and layouts. There's a little bit of backstory as to why all these races are fighting each other, but you don't have to know any of it to actually play or enjoy the game. If you have seen any sci-fi at all, chances are you know the backstory anyway.

There isn't a direct head-to-head multiplayer; instead, players compete by putting together fleets on their own computer and submitting them as "Challenges" to an online server. Other players can then download these Challenges and attempt to beat them with their own fleets. The server keeps track of both the number of attempts and the names of those who beat the Challenge.

In addition a Campaign expansion pack has been released that allows the player to provide just a bit of context to the gratuitous combat, as they spread across the galaxy, invading planets and building ever-expanding battle fleets. Just the thing for all you megalomanical conquerers!

was released in 2015, but it was not well-received and quickly abandoned by the developers.