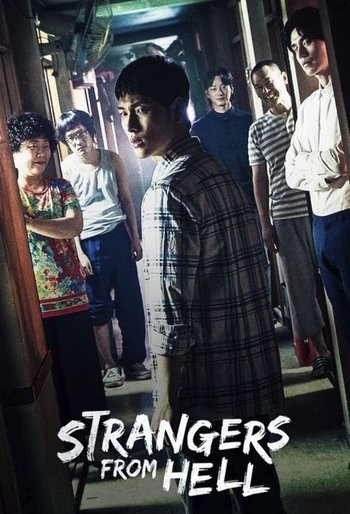 You had fun too.
Advertisement:

Strangers From Hell (Hangul: 타인은 지옥이다; RR: Taineun Jiogida; also called Hell is Other People) is a 2019 South Korean television series based on the NAVER WEBTOON of the same name by Kim Yong-ki. Starring Im Si-wan and Lee Dong-wook, it was released worldwide in 2020 by Netflix.

The series follows the handsome Yoon Jong-woo (Im Si-wan), an aspiring crime-novelist who moves from the countryside to Seoul after landing a job at his senior's new company. Short on cash, he saves money by renting a room in the hostel, Eden Gosiwon. After dealing with strange encounters with the residents, he begins to wonder if his frugality might have cost him more than he bargained for.

A prequel movie and a spin-off are rumoured to be in the works.