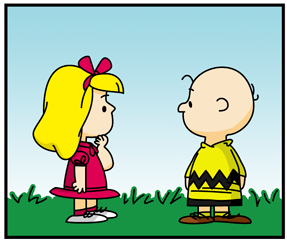 , based on Charles Schulz's iconic Peanuts.

In this story, Snoopy's former owner Lila moves to Charlie Brown's neighborhood and joins him and the rest of the gang.

The comic strip can be found here

Peanuts Untold has trope examples of: