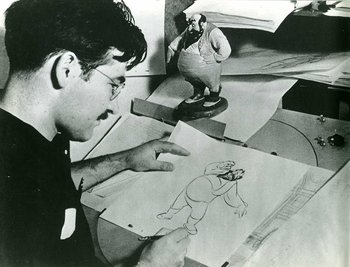 "Everything was 'feelings' with Bill...He did not just get inside Stromboli, he was Stromboli, and he lived the part."
—Frank Thomas and Ollie Johnston, The Disney Villain
Advertisement:

Vladimir Peter "Bill" Tytla (1904-1968) was an animator best known for his personality animation at the Walt Disney studios.

He got his start in animation at age 16 lettering title cards for Paramount Pictures' cartoons, and later became an artist on Paul Terry's "Aesop's Fables" studio. He soon became fascinated with the fine arts and in 1929, traveled to Paris to study painting. The next year, he returned to the U.S. and got an animator job at Terry's new Terrytoons studio. He was great friends with fellow animator Art Babbitt and was saddened when he left for Disney in 1932. After several invitations from Babbitt to move west, Tytla finally came to Disney in 1934, for a smaller pay than at Terrytoons. Some of his early assignments at Disney included Clarabelle Cow in Mickey's Fire Brigade and the bully rooster from Cock o' the Walk.

Walt Disney quickly realized Tytla's talents, and he assigned him with Fred Moore to develop the seven little men for his first feature film, Snow White and the Seven Dwarfs. He animated the famous scene where the stubborn Grumpy begins to warm up to Snow White after receiving a kiss from her, which is considered a prime example of Character Development. Afterward, he animated the villainous and hot-tempered Stromboli in Pinocchio, which is said to be an assignment that showed what Tytla was capable of in terms of animated acting. For Fantasia, he animated the sorcerer Yen Sid from "The Sorcerer's Apprentice" and the devil-like Chernabog from "Night on Bald Mountain", the latter being considered his finest work. However, he didn't want to be typecast animating heavies, so he took on the task of animating the sympathetic title character from Dumbo.

Despite being one of Disney's highest-paid animators, he was sympathetic to the overworked and underpaid artists who worked under him. He participated in the infamous Disney animators' strike in 1941 and during that time, briefly joined the MGM cartoon studio to work on the title character of The Hungry Wolf. He stayed with Disney after the strike ended, but was unsatisfied with how things were going in the strike's aftermath. After working on Saludos Amigos and Education for Death, Tytla departed from Disney in 1943, a decision he would regret for the rest of his life.

Tytla returned to New York to his roots at Terrytoons, where he was soon promoted to director. After only one short, the Mighty Mouse picture The Sultan's Birthday, Tytla moved over to Famous Studios, where he would direct cartoons starring Little Lulu, Popeye and Little Audrey. After leaving Famous in the early 50s, he worked on commercials for Tempo Productions. During the 1960s, he would direct on animated TV shows like Deputy Dawg and The New Casper Cartoon Show. His last major work would be as the animation director on the Warner Bros. live-action/animated feature The Incredible Mr. Limpet, with his final years spent slumming it on made-for-TV cartoons at Hanna-Barbera. Towards the end of his life, he tried to return to Disney several times, but he was told he wasn't needed on the now-fledgling animation staff. The ill Tytla died on December 30, 1968. He was posthumously awarded the Winsor McCay Award in 1981 and was named a Disney Legend in 1998.