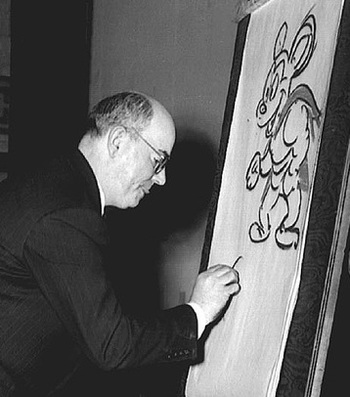 Jim drawing a doodle of Mighty Mouse.
"As my hero animator, Jim Tyer, used to say, "Hey Ralph, stop worrying. Everything moves, so put it down, have fun and go home." Yeah, Jim had fun, more fun than any animator I knew at the time. He distorted, he drew off model — yes, off model, and threw shapes around like he was Jackson Pollack, the animator. He had fun. The rest of the guys stared at Disney and cried, "If we could only do that, boo-hoo." Jim would walk around the inking department — yes, hand-inking with Crokille pens — telling the inkers, "Don't worry about where my line is, don't stiffen up the animation, keep it loose. The color will hold it together. Have fun. It is just cartoons." This, compared to another guy who would scream, "You wiggled the nose on that cel! What are you doing ruining my animation that way!"
—Ralph Bakshi on his mentor
Advertisement:

James Tyer (February 7, 1904 - March 1976) was one of the most unique animators who ever lived, having a long and varied career throughout the History of Animation, but most famous for his work at the Terry Toons cartoon studio.

Jim got his start in animation in 1926, working at the Aesop's Film Fables studio, which would eventually become the Van Beuren cartoon studio. In these early films, one can already see his unique animation style starting to bloom, such as the bizarre climatic fight scene of the Cubby Bear short "Love's Labor Won" (1933), the ending scene of "Polar Pals", the cat with the fiddle scene in "Nursery Scandal" and the opening animation of Santa Claus in "Opening Night". While there, he also directed at least four cartoons, Marching Along and Pals (AKA Christmas Night) in the Little King series, and Grandfather's Clock and A Little Bird Told Me in the Toddle Tales series.

In the mid 1930's, Jim wanted to improve his skills as an animator, so he left Van Beuren in 1935 to hold very brief stints at both Disney and MGM, the former as an effects animator on the Silly Symphonies (animating the opening crowd shot in "Cock o the Walk" and some of the water scenes in "Music Land") and as a more standard animator and gag man on the Happy Harmonies films, where he contributed animation to shorts like "Little Cheeser" (one scene is that clearly his work is the scene with a living cuckoo clock) and "The Pups Picnic" (where he animates a perfectly straight scene of a fox chasing the pups through the forest in the climax).

After that, Tyer briefly found work at the obscure Jam Handy industrial cartoon studio, where he animated films like "Drawing Account" singlehandedly, and then jumped over to Fleischer Studios, just when the studio was transitioning into becoming Famous Studios. He not only got to helm his own animation unit there, but also contributed animation to many of the Famous Popeye cartoons of the early to mid 1940's, such as the last 45 seconds of "Too Weak to Work", the entire ending of "Her Honor the Mare", a fight scene between Popeye and Bluto in "Shape Ahoy" and the climax of "Service with a Guile".

In 1946, Tyer left Famous and found work at the Terry Toons cartoon studio, where he stayed up until the late 1950's, and this was where his drawing and animation style came full bloom. The lack of quality control at the studio basically made it a creative paradise for Tyer, where he was able to distort and move in drawings in a way he had never been allowed to in any other studio. His style in these films is very easy to spot—one example is in the film "Ten Pin Terrors", where Tyer animates the bulldog grabbing a bowling ball that has had glue poured into its holes. Other examples of his work for the studio include the opening of "House Busters" and "A Cat's Tale".

After the theatrical cartoon business started drying up and switching to more strict, on-model animation, Tyer drifted to the realm of TV animation, where he contributed work on shows like Joe Oriolo's Felix the Cat revival and The Mighty Hercules. He also worked on made for TV Out of the Inkwell revival for Hal Seegar's studio, also contributing work to the shows Milton the Monster and Batfink. At Paramount, he animated on a few of the Snuffy Smith cartoons. He apparently held a very brief tenure at Hanna-Barbera, but quickly left there when it became apparent that his kind of animation clashed too much with the studios established house style. This is likely a fate Tyer met when trying to find work at other studios, where emphasis on hard on-model animation of studios like Filmation made Tyer an outcast in the industry he once flourished in.

Tyer's last major animation work was animating on Fritz the Cat, the debut feature film of his prestige Ralph Bakshi, where he animated scenes of the crows in Harlem. After completing his work on the film, he retired from the business for good, and passed away a few years later.

Inbetween his animation jobs, Jim Tyer also moonlighted artwork for many, many funny animal comic books, including the many TerryToons comics, Haha Comics, and even certain issues of Felix the Cat. In most of them, his distinctive cartoon style makes it rather easy to spot out his work.

In recent years, Tyer has gained something of a loyal cult following among animators and cartoon buffs. In the 1970's, N.Y. animator Tony Eastman made an independent film in homage to Tyer's style called TV Baby. Tyer was also cited as an influence on Ralph Bakshi's Mighty Mouse: The New Adventures show, as well as John Kricfalusi's The Ren & Stimpy Show.

A semi-biography of Jim Tyer that describes his style and works that he animated on, written by animator and historian Mark Mayerson, can be read here.

A list of cartoons that he animated on can be found on IMDB.