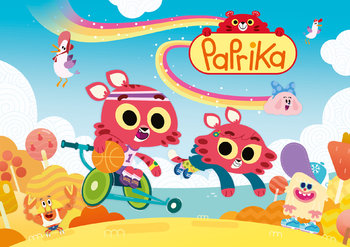 Paprika is an animated series produced in 2018 by French animation studio Xilam.

The series follows the adventures of Stan and Olivia Paprika, a pair of pre-school aged anthropomorphic cats, who also happen to be fraternal twins, as they go about their day playing games and having fun with their friends and neighbors.

Has nothing to do with the Satoshi Kon film of the same name.