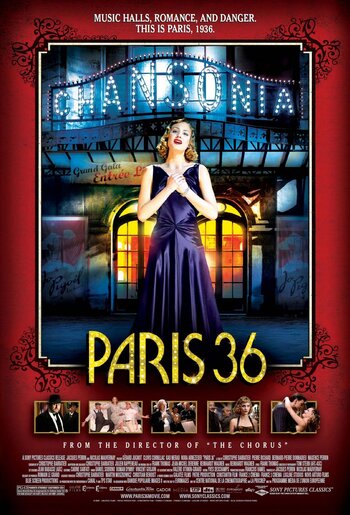 Paris 36 (French title Faubourg 36) is a 2008 French film directed and written by Christophe Barratier. It is his second feature film after The Chorus.

In 1936 Paris, during the governance of the French Popular Front

amidst The Great Depression, Germain Pigoil (Gérard Jugnot), Émile "Milou" Leibovich (Clovis Cornillac) and Jacky Jacquet (Kad Merad) are three jobless entertainers who decide to reprise the cabaret/theater where they once worked, the Chansonia, after their director committed suicide out of a debt he owed to ruthless businessman Félix Galapiat (Bernard-Pierre Donnadieu). Due to having only amateur stage artists at their disposal, they struggle big time to attract success. Then, one day, a young woman named Douce (Nora Arnezeder) starts singing — beautifully — in their theater.

The song "Loin de Paname" was nominated for the Academy Award for Best Original Song.