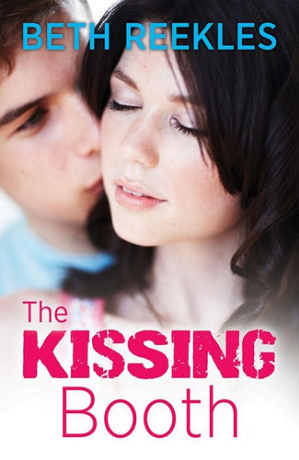 "There was a little voice somewhere in the back of my mind that told me I wouldn't be in this whole mess in the first place if we hadn't done the damn kissing booth."
The Kissing Booth is a young adult, romance novel written by Beth Reekles. It was first serialized in Wattpad before being published by Random House in 2013, making it one of the first Wattpad stories to be published.
Advertisement:

The novel is about Elle Evans, a high school junior who has never kissed, dated, or had sex with any boy, despite being rather popular herself. This changes when she ends up having to kiss Noah Flynn, the school's quarterback and popular jock whom Elle had a crush on when she was a girl, during a kissing booth event that she sets up for the school carnival. Elle starts to fall in love with Noah, who, fortunately, reciprocates it.

Problem is, Noah happens to be the older brother of Lee Flynn, Elle's inseparable playmate since childhood. And Lee has stated from time to time that he can never picture her dating his brother.

Torn between her feelings for Noah and her friendship with Lee, Elle struggles to balance the two, knowing that for every day she is seeing Noah, she is lying to everyone else. Most importantly, her best friend.

It was adapted to a film with the same name by Netflix in 2018, starring Joey King as Elle, Joel Courtney as Lee, and Jacob Elordi as Noah. Following the film's success, Reekles authored a short story titled The Beach House in 2019, which expands on the epilogue of the original novel. Subsequently, she released a full-on sequel, Going the Distance, in 2020, focusing on Elle's Senior Year Struggles. It was adapted to The Kissing Booth 2, released the same year by Netflix. A third film, The Kissing Booth 3, was released in 2021, adapting the premise of The Beach House while giving it a new context.