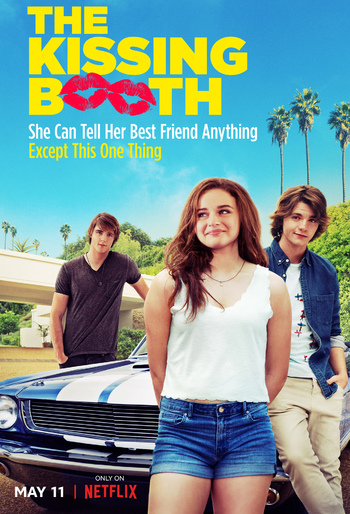 A 2018 teen romantic dramedy film, based on the novel of the same name by Beth Reeklesnote Notable for being one of the few Wattpad stories to be published and distributed in print form and directed by Vince Marcello.

It revolves around Elle Evans (Joey King), a teenage girl who develops a crush on older student Noah Flynn (Jacob Elordi). However, one of the biggest obstacles to them getting together is Noah's brother Lee (Joel Courtney), who happens to be Elle's Best Friend with whom she has a set of strict 'friendship rules'. Chief amongst these rules is "No dating your friend's siblings", but will Elle's feelings for Noah trump her friendship with Lee?

The Kissing Booth contains examples of: