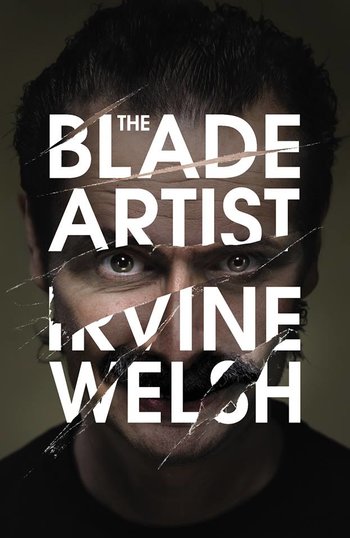 The Blade Artist (2016) is the eleventh novel by Irvine Welsh, and unusually focuses primarily on one member of "The Leith Mythos", the infamous Scottish hardman/psychopath Francis "Franco" Begbie. Picking up in the present day many years after the events of Porno, Franco has done what nobody can fathom and gone straight, via the classic Choose Life monologue (the non-snarky version) once stated by his old friend Mark Renton. But his life is better than just a drab old middle class existence; he's married Melanie, a wealthy American prison therapist who helped turn his life around during his latest stint in jail. Now going by "Jim Francis", he's become a success in his own right by sculpting head busts of famous British and American figures and then mutilating them in shocking and various ways, exhibiting them as an artist in California. He views with contempt those who think he's just putting on an act or that he'll relapse in a moment's notice. The father of two lovely little girls, and having dumped alcohol and tobacco, he's a picture of self-control and reformation, and the psycho villain days are well behind him... or are they?

To achieve this cushy new lifestyle, Jim had to leave Leith and his old life behind, and that he did for six long years. But he receives a phone call from his younger sister Elspeth, who tells him that his abandoned son Sean Begbie has been murdered. Determined to find the killer, Franco returns to Edinburgh and becomes reacquainted with several important figures from his past. These include his brother Joe Begbie, an alcoholic drifter, Elspeth herself, who doubts his motives and reformation (unlike her husband Greg, who sees the best in everyone), his other estranged son, Michael, his ex-girlfriend (and who he used to abuse) June, the mother of the boys, and notable figures on both sides of the law. As he investigates the crime, Begbie faces the judgemental expectations of many who expect him to conjure his old psychosis and "solve" problems that way, while also confronting his historical demons and the realities of Leith in the current day. And as Melanie learns the horrifying truth about a pair of thugs who threatened her family just before Jim left, she starts to worry about her husband's troubled past and ambiguous present...

In 2013 Welsh published a short story