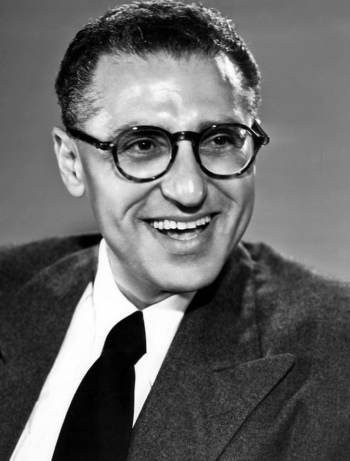 "Give me a good script, and I'll be a hundred times better as a director."
Advertisement:

Cukor was born in New York City, the son of Hungarian Jewish immigrants. His father wanted him to go into law but Cukor became obsessed with the theater and by 1920 was working full-time with a production company in upstate New York. In the latter part of the 1920s he began making an impression with New York theater critics.

The coming of talkies to Hollywood led the studios to scour the theater world for talent, and Cukor was hired by Paramount. He worked as part of the production crew for All Quiet on the Western Front before starting to get work as a director by 1931. His career really took off in 1932 when he signed with RKO Pictures and began directing most of RKO's prestige projects. He directed several of Katharine Hepburn's first starring roles.

Cukor typically directed domestic dramas and screwball comedies as opposed to Westerns or action films, and gained a reputation as a "woman's director", one which Cukor himself believed was unfair. The reason being that he considered himself, with good justice, to be an excellent director of actors as well as actresses. Cukor spent three years on development of the film adaptation of Gone with the Wind before being fired shortly after production began and being replaced by Victor Fleming. Sources disagree on the reason for his termination, with some attributing it to homophobic star Clark Gable demanding that Cukor, who was gay, be dismissed. (Cukor's homosexuality was always something of an open secret, most people in the industry knew about it.) Others attribute it to more mundane conflicts between Cukor and producer David O. Selznick. Something like a half-hour of Cukor's footage remains in the film. Cukor bounced back from this disappointment by directing smash hit The Philadelphia Story the very next year. This would not be the first time Cukor would face Executive Meddling however. Despite having a reputation as an industry professional and stalwart, a number of his films faced Re-Cut and changes against his will, including but not limited to The Actress, A Star is Born, Justine among others. He was known to be immensely sociable and elegant in public, with his parties being the center of Hollywood life but he was also known to be stern and demanding on his sets, with a remarkable capacity to swear like a sailor, shocking everyone with his Sophisticated as Hell personality.

Cukor kept working for the rest of the studio era and beyond. In the 1950s he directed several more films with Katharine Hepburn as well as several with Judy Holliday, including her most famous film, Born Yesterday. He was director of Something's Got to Give with Marilyn Monroe, a production that was shut down when Monroe died in 1962. Late in his career he enjoyed one of his greatest triumphs when My Fair Lady won the Oscar for Best Picture and won Cukor the Best Director award (he was nominated five times). His 1976 adaptation of The Blue Bird, a rare co-production between the United States and the Soviet Union, was a notorious flop. His last film, Rich and Famous, came less than two years before his death of a heart attack in 1983.