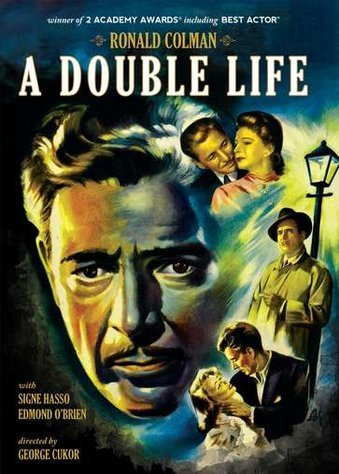 A Double Life (1947) is a Film Noir starring Ronald Colman, Signe Hasso, Edmond O'Brien, and Shelley Winters. It was directed by George Cukor and boasts a screenplay from Garson Kanin and Ruth Gordon with a little help from William Shakespeare.

Anthony John (Colman) is a great stage actor; however, his Method Acting often takes him too far into the deep end. Events go awry when he’s given the part of Othello, as his life starts to reflect that famous play.

Caught up in the mess is his ex-wife Brita (Hasso) and publicist Bill (O’Brien) who Tony thinks are playing the parts of Desdemona and Cassio while waitress Pat (Winters) is also unwittingly involved.

This is the role that won Ronald Colman his first and only Academy Award for Best Actor. Miklos Rozsa also won an Oscar for Best Music.