Film / One Hour with You 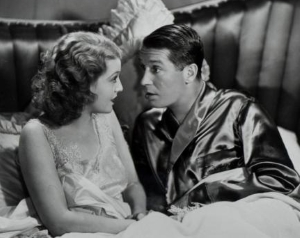 No Sleeping Single for the Bertiers!
A 1932 Musical movie starring Maurice Chevalier, Jeanette MacDonald, Genevieve Tobin, and Charlie Ruggles. Directed by Ernst Lubitsch and George Cukor, it is a remake of Lubitsch's 1924 silent film The Marriage Circle.
Advertisement:

In Paris, Dr. André Bertier (Chevalier) and Colette (MacDonald), his wife of three years, live in a state of connubial bliss until Colette's flirtatious school chum, Mitzi Olivier (Tobin), visits, and André is tempted to have an affair. Mitzi schemes to get André alone, and whenever he tries to avoid her, Colette pushes them together because she thinks he doesn't like her dear friend. Meanwhile, Mitzi's husband wants to divorce her, so he is having her tailed by a detective. And while Colette's suspicions grow, she finds it increasingly difficult to resist the advances of André's friend Adolph (Ruggles). In the end, they both confess to their indiscretions and cheerfully forgive each other.

One Hour With You provides examples of the following tropes: