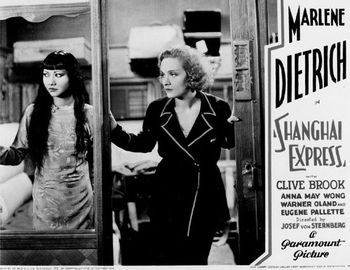 "It took more than one man to change my name to Shanghai Lily."
—Lily/Madeline
Advertisement:

It's 1931 and China is torn by civil war. A motley group is boarding the express train from Beijing to Shanghai: "Shanghai Lily" (Dietrich), a high-class Caucasian prostitute; Hui Fei (Wong), a high-class Chinese prostitute; Capt. Donald "Doc" Harvey (Brook), who is urgently needed in Shanghai to perform an operation; Henry Chang (Oland), who is keeping a secret; and other passengers that include a German opium dealer and a fussy Englishwoman with a dog.

Some of the passengers disapprove of two hookers riding along in the first class car. However, one of them knows Lily: Donald, who calls her "Madeline", and was her lover before they broke up and she turned to prostitution. Donald is appalled to learn of what Madeline's been doing the last five years, but that and all other petty concerns are set aside when the train is waylaid by rebel bandits. It turns out that Chang is actually the rebel leader, and has had the train seized in order to take hostages.

The fourth of seven film collaborations between Dietrich and von Sternberg, and a big hit in 1932.