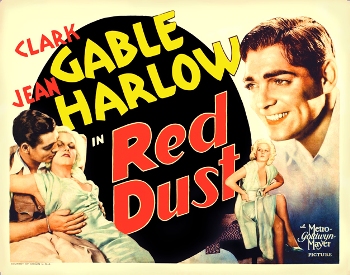 Dennis Carson (Gable) manages a rubber plantation in French Indochina. A prostitute named Vantine (Harlow), who is seeking to avoid the authorities in Saigon, arrives at the plantation, having taken the boat upriver. She and Dennis flirt for a little bit before starting a relationship. That relationship is interrupted when engineer Gary Willis and his wife Barbara (Astor) arrive. Barbara is a classy, sophisticated lady, the exact opposite of the wisecracking Vantine. Dennis finds an excuse to send Gary on a difficult surveying expedition deep in the jungle, while Barbara, who stays behind, proves receptive to Dennis's charms.

Red Dust was a big hit for MGM, and it made Gable the most popular leading man in Hollywood. Gable and Harlow starred together several more times before Harlow's untimely death at the age of 26 in 1937. 21 years later, Gable again starred in The Remake, Mogambo, with Ava Gardner in the Harlow part and Grace Kelly in the Astor part. Red Dust has a place in the National Film Registry.