Film / The One and Only, Genuine, Original Family Band 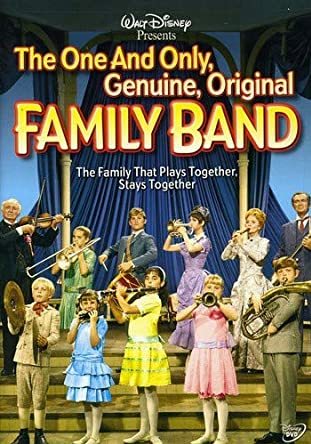 Let's put it over with Grover!
Don't rock the boat! Give him your vote!
Give your vote to a man who's a leader of men
Let's put Grover over again!
Advertisement:

The One and Only, Genuine, Original Family Band is a 1968 Disney live-action musical film featuring (of course) songs by The Sherman Brothers. It stars Walter Brennan, Buddy Ebsen, Lesley Ann Warren, and John Davidson, with Kurt Russell and Goldie Hawn appearing in early bit parts. In fact, this was Hawn's film debut.

The year is 1888, and Grover Cleveland, the Democratic president, is running for re-election against Republican challenger Benjamin Harrison. The titular musical family, the Bowers, is politically divided, with Grandpa being a Democrat while his son Calvin is a Republican. Grandpa is outraged when Alice, Calvin's eldest daughter, starts dating Joe Carder, who runs a Republican newspaper. Joe persuades the family to join him out west in the Dakota Territory, and they do so. However, even Dakota is the subject of a partisan fight. It's expected that Dakotans will vote Republican, so the Republicans want to admit Dakota to the Union as two states, in order to give themselves more representation in Congress, whereas the Democrats would obviously prefer that it be one state. In a Dakotan town that is indeed overwhelmingly Republican, Grandpa's outspoken Democratic views get him into increasing trouble. Will everyone be able to come together as Americans despite their differing politics?

This was the last film for which Walt Disney himself played a major role in the development process. He lived long enough to approve the screenplay and the songs but died before production began.