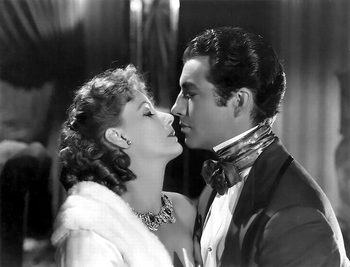 It is based on the novel La Dame aux Camelias by Alexandre Dumas, fils, popularly known in English as Camille, and also the source of the opera La Traviata. This non-musical adaptation finds Garbo playing Marguerite Gauthier, a high-class courtesan in 1847 Paris. Marguerite is starting to get a little long in the tooth to be a hooker, at least of the high-class variety, and she also has run up a lot of debts due to excessive generosity with her friends. Needing a means of support, she manages to become the kept woman of snooty, ultra-rich Baron de Varville (Henry Daniell).

Younger audiences might recognize this as the movie Daddy Warbucks takes Annie out to see in the 1982 film Annie.